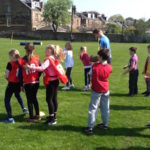 There are many bands singing hockey songs. They play inspirational hockey songs for the team in order to boost their spirit. The themes of hockey songs vary widely from band to band. There are humorous hockey songs, songs about hockey players and songs praising the segments of famous hockey events.

There are a numerous hockey songs popular in Canada. The game of ice hockey is the most popular game and the national winter sport in Canada. Many Canadians are obsessed with hockey that has become a part of Canadian culture. Hockey songs are written in order to inspire and motivate the hockey players.

Of several hockey songs, ‘The hockey song’, is the best. Written by ‘Stompin’ Tom Connors, it is an immortal song celebrating Canada’s love for hockey. Well known for its chorus, the song has spilt up verses, each one describing a period of play in a typical hockey game. This song is the most played one at all Canadian hockey events.

Another classic hockey song is the Tragically Hip song “Fifty Mission Cap.” This song is a true song story about Bill Barilko, who scored one of the most famous goals in National Hockey League history. The legend of Barilko, who scored the 1951 Stanley Cup winning goal for the Toronto Maple, and his mysterious death are forever immortalized in this song.

Other popular hockey songs are “Hockey” by Jane Siberry, “Hockey Night in Canada” of The Shuffle Demons, “Gordie and My Old Man” of Grievous Angels, “The Ballad of Wendel Clark, Parts I and II” of Rheostatics, “Hit Somebody!” by Warren Zevon and “The Zamboni Song” by Gear Daddies.