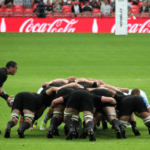 Every rugby team covets the number one spot in the rankings. For over 7 years this position has been held by New Zealand, and they have won 2 World Cups and lost just 7 matches.

Generally, the southern hemisphere is perceived as the stronger of the two, but this may change. The northern hemisphere’s teams are fighting back. Ireland claimed their first ever victory over New Zealand in November 2017 and England has decreased the gap between the Kiwi’s ranking and theirs thanks to a 100% record in 2016.   Australia has also suffered a defeat against England.

The Six Nations championships play a significant role in world rankings and so the teams’ focus is on performing well ahead of the Rugby World Cup draw and boosting their overall position.

The Six Nations sides have already qualified for the World Cup draw, as has Georgia, Japan and the four Rugby Championship sides. On 10 May, the 12 teams will be split into 3 groups of 4, where 1 will be placed into each of the World Cup pools.

Avoiding another “Pool of Death”

At the last Rugby World Cup, England, Wales and Australia found themselves in the same pool, hence the nickname it was given. Whilst the matches in the “pool of death” were exhilarating, England, the hosts, were forced in to an early exit from the tournament, something that the team and fans will be eager to avoid in 2019.

The rankings are reasonably settled. New Zealand is leading, and unless England has a horrendous Six Nations they should remain in 2nd place. Ireland’s team isn’t under great pressure, the only concern is that if Wales win a grand slam, they’ll join Australia in the top tier. Wales is currently 5th in the rankings.

The top 4 teams should remain in the same positions and in the 2nd tier Wales and South Africa will meet with two of the following, France, Argentina and Scotland.

We can look forward to another “pool of death.”

With so much resting on the Six Nations and the success of its participant teams, the Six Nations tickets which are always highly sought after could become proverbial gold dust.  For such a prestigious event, rugby hospitality is an essential component of a spectacular sporting day out.

You’re watching the best compete so do so in luxurious and state of the art surroundings, savour fine dining experiences, free bars, drinks receptions, souvenirs and opportunities that standard Six Nations ticket holders cannot enjoy. From this event, you can look forward to rugby hospitality benefits through market leaders like DTB Sports and Events at the 2019 Rugby World Cup in Japan.

At the Rugby World Cup in 2015, 80% of business leaders viewed rugby hospitality as a vital marketing tool, so why not mix business and pleasure?