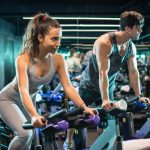 COVID-19’s Lingering Effects: Would You Exercise in a Bubble?

Imagine owning a small business that, by COVID-19s standards, is both nonessential and high risk. Maybe you don’t have to imagine. Perhaps that is your story. If so, how are you fairing in the midst of so many restrictions? More importantly, what do your customers think of your recovery efforts?

All of these questions are inspired by a story out of Montpelier, Vermont, where one indoor cycling studio decided to install ‘plastic bubbles’ that allow members to take classes without having to wear masks or worry about coming in contact with others.

When you consider how much of a sweat you can work up after 45 minutes on a bike, it is understandable that both management and customers would be a bit wary of returning to the studio. But this particular studio made it work.

An Idea Tried at Home

WCAX reports that Alpenglow Fitness owner Sky Barsch got the idea for the barriers from one of her trainers. They built a prototype in the trainer’s house to get a feel for how it would work. They were so impressed that they set about installing the barriers in the studio.

The barriers are nothing more than two by fours and acrylic panels that create a bubble around each cyclist. Riders can enter their individual bubbles, get on their bikes, and dial into their workouts in confidence. There are no worries about getting too close because each bubble keeps the rider inside isolated.

Individual bubbles work for this particular studio in Vermont. It is not clear that it would be a doable solution in every studio. For starters, erecting the barriers costs money that some struggling studios might not have. There are also concerns about air circulation and customers feeling claustrophobic.

While Alpenglow Fitness has taken extra measures to get their studio open again, studios in other metropolitan areas have remained closed. One such studio, Salt Lake City’s Mcycle Studios, is doing its best to keep customers engaged by offering online classes.

Customers with their own exercise bikes can sign up for classes just as they would for in-person classes. At the designated time, they log in to the studio’s website where they are greeted by their trainer. That trainer conducts the exact same class online that would be conducted in the studio.

Encouraging cycling at home does eliminate the social aspect of going to the studio. On the other hand, it might be exactly what the doctor ordered for people who are still afraid of exercising in a group setting. Bubble or not, there are some cyclists who just will not go back to the studio or gym until all of this has passed.

Too Many Unknowns Right Now

Neither Mcycle Studios nor Alpenglow Fitness can lay claim to doing things the ‘right way’. There is no right way right now. There are far too many unknowns, both short- and long-term. The reality is that both studios are doing what they can to keep their customers active and engaged.

As an indoor cyclist, what do you think? Would you be willing to go back to your local cycling studio if they offered private bubbles for each rider? Would you resume studio classes if required to wear a face mask?

We now find ourselves in a place in which nothing is the same as it was at the start of the year. So much of what now constitutes daily life is still unfamiliar. From exercising to socializing with friends, virtually everything is influenced in some way by coronavirus. That’s just the way it is.